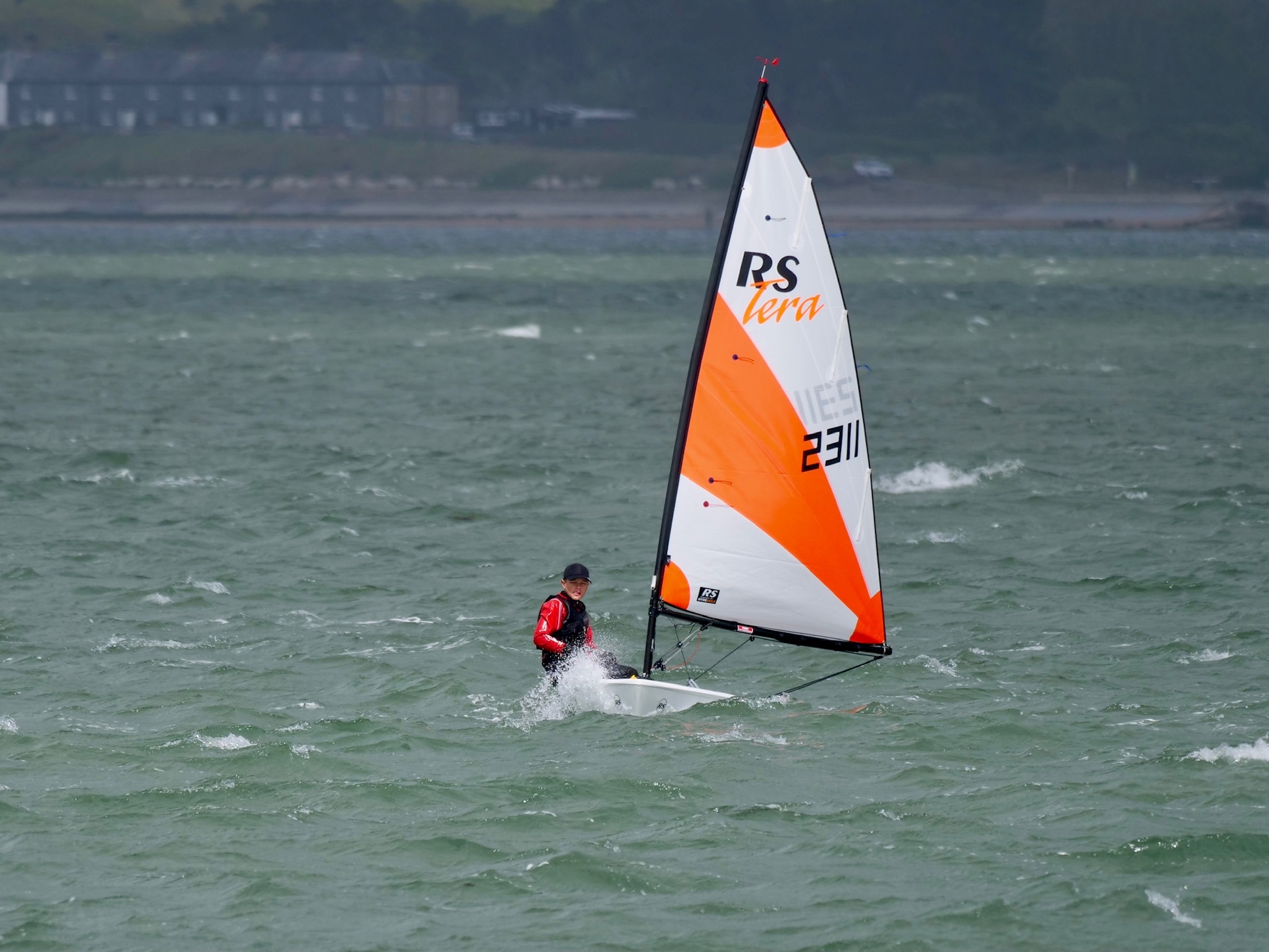 Gurnard Sailing Club on the Isle of Wight hosted the RS Tera Southern Area Championships over the weekend of 15th & 16th May. 19 Isle of Wight based sailors were joined by 21 visitors from the "North Island" to give 29 entries in the Sport fleet and 11 sailors in the Pro fleet. On cue, a westerly breeze filled in just after midday to allow racing to get underway after a short postponement in initially bright sunshine. In a rapidly building breeze, Gurnard sailor Fred Salter showed the visitors the way in the Pros in race 1 while, in the Sport fleet, it was Alex Sydenham (HISC) who came out of the blocks the quickest to secure the win. With the tide now starting to head west the Pros were too eager to get away in race 2 and had two general recalls before eventually starting. The Sports also had a general recall while all the time winds had crept up to 20 knots gusting over 25. With squalls of rain now coming through and with the wind due to increase further, the difficult decision was made to send the Sport sailors in for the day without completing their second race. The Pros toughed out the conditions with Finlay Lomas-Clarke from Frensham Pond showing the sea sailors how to do it with a first place.

On Sunday, Race Officer Steve Cole got racing away early in the face of another challenging forecast. Short tacking along the shore against a flood tide was the key to quick progress upwind and Sam Osbourne (Royal Victoria Yacht Club) in the Pros and Will Bradley (Gurnard Sailing Club) in the Sports looked to be liking the conditions with both securing 2 wins from the first 2 races. Winds had now increased to 20+ knots again and many sailors were struggling with heavy gusts upwind and difficult conditions downwind and there were many capsizes and several retirees. Samuel Osbourne kept the hammer down and sailed away in the Pro fleet final race of the day ahead of Mark Jenkins Jauma (HISC) and Finlay Lomas-Clarke. Samuel's dominance on the second day secured him the Southern Area Pro Championship ahead of Finlay Lomas-Clarke and Fred Salter. The final race in the Sport Class was a windy affair and looked to be a show down between Alex Sydenham, Ruby Sunderland (Brading Haven YC) and Will Bradley who had all sailed consistently so far. Will was OCS and had to return to start while Ruby Sunderland capsized on the second run losing her places. Meanwhile Tristan Harding (Frensham Pond) followed by Ben Anderson (Gurnard Sailing Club) and Alex Sydenham had broken clear. Alas, Alex capsized towards the end of the final run and took a while to recover giving him a high score with no discard to play. Will had worked his way back up to 4th with Ruby one place behind. The overall results saw Will Bradley becoming Southern Area Sport Champion ahead of Ruby Sunderland with Tristan Harding taking third. At the prize giving, GSC Vice Commodore Robin Leather thanked the small army of volunteers who help run the event and awarded prizes to Aimee Bulkes and Raffy Seddon for their perseverance and enthusiasm in the challenging conditions. 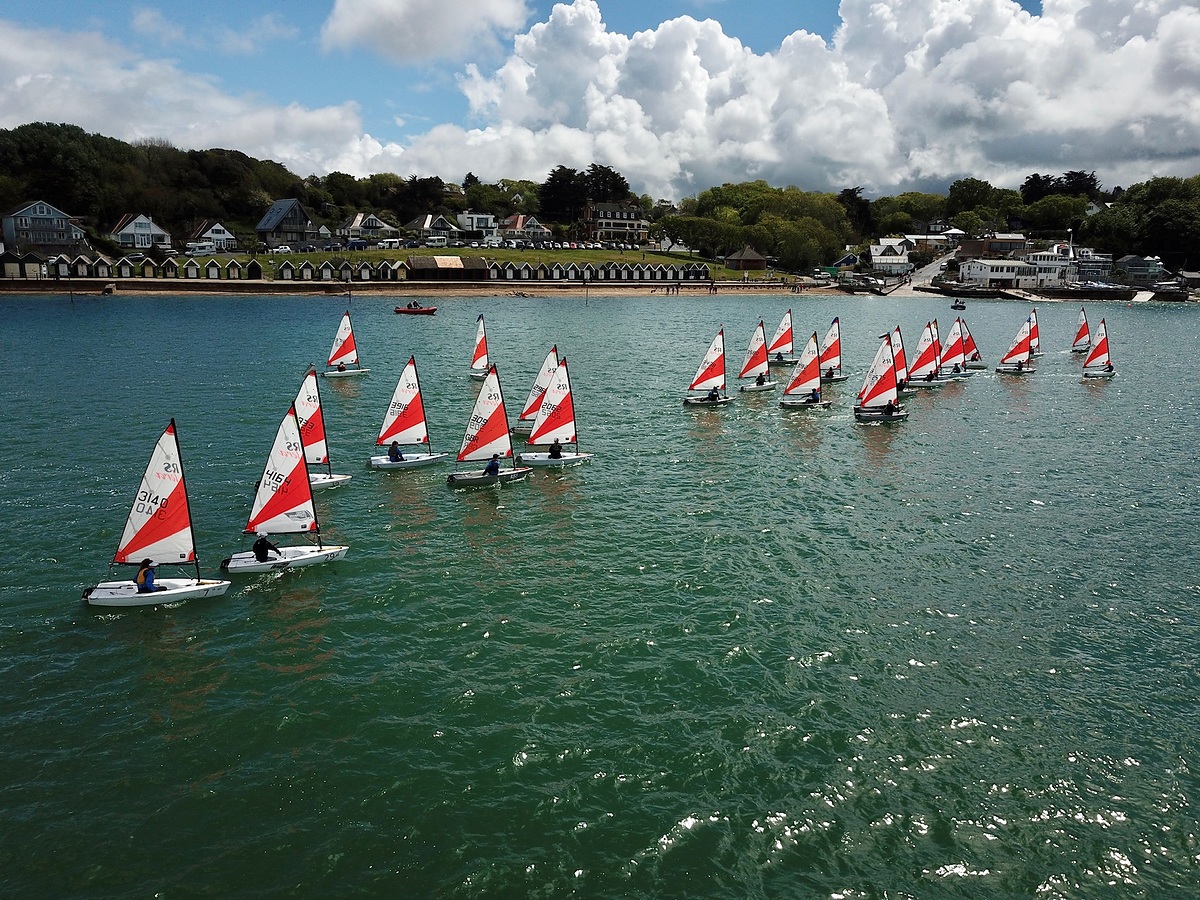 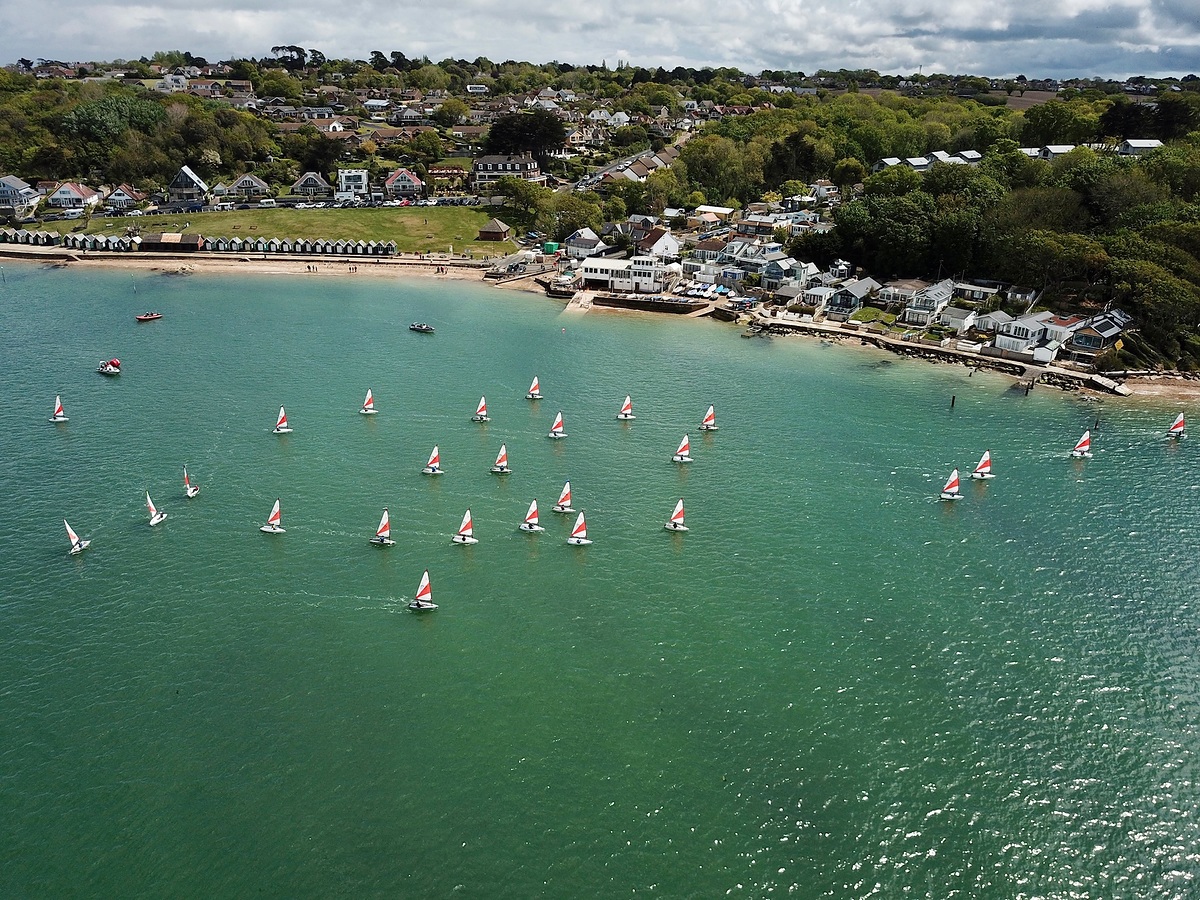 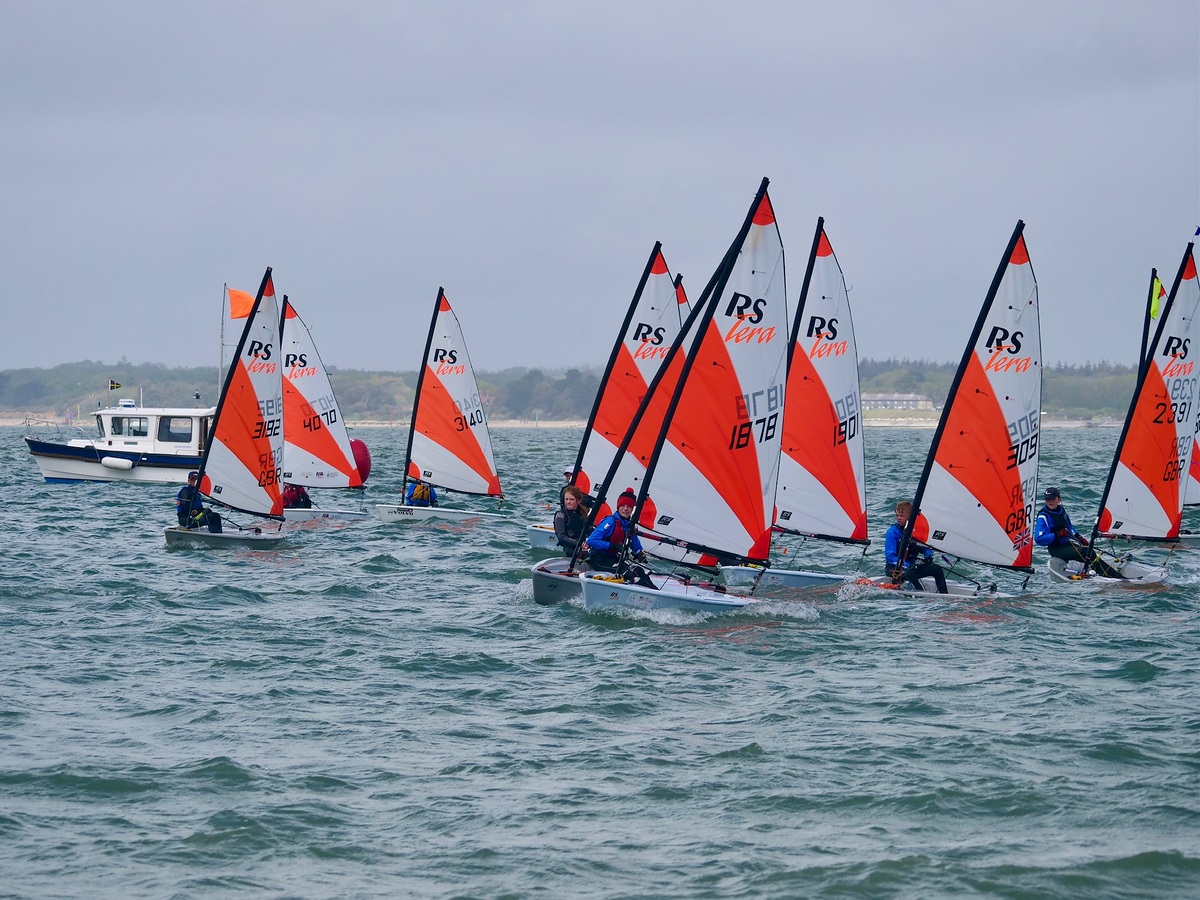 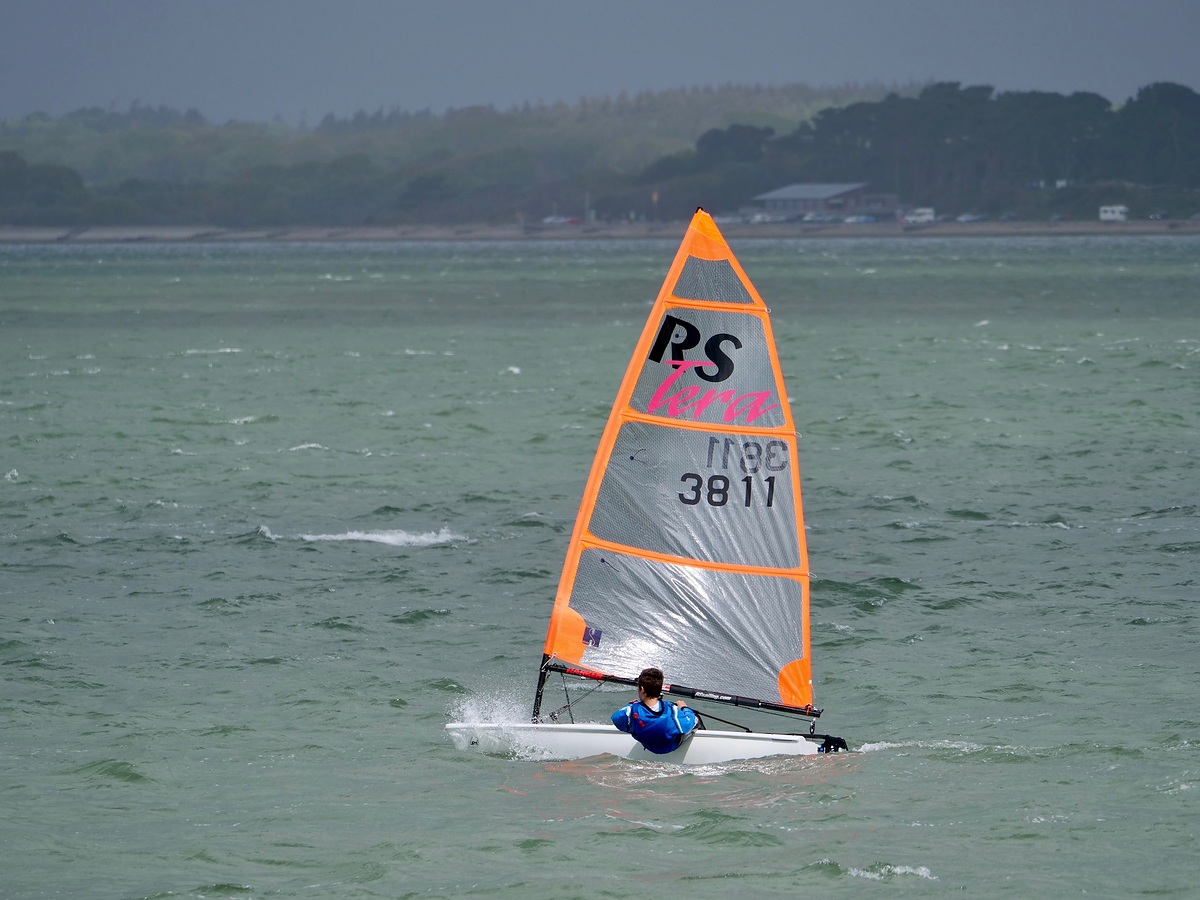 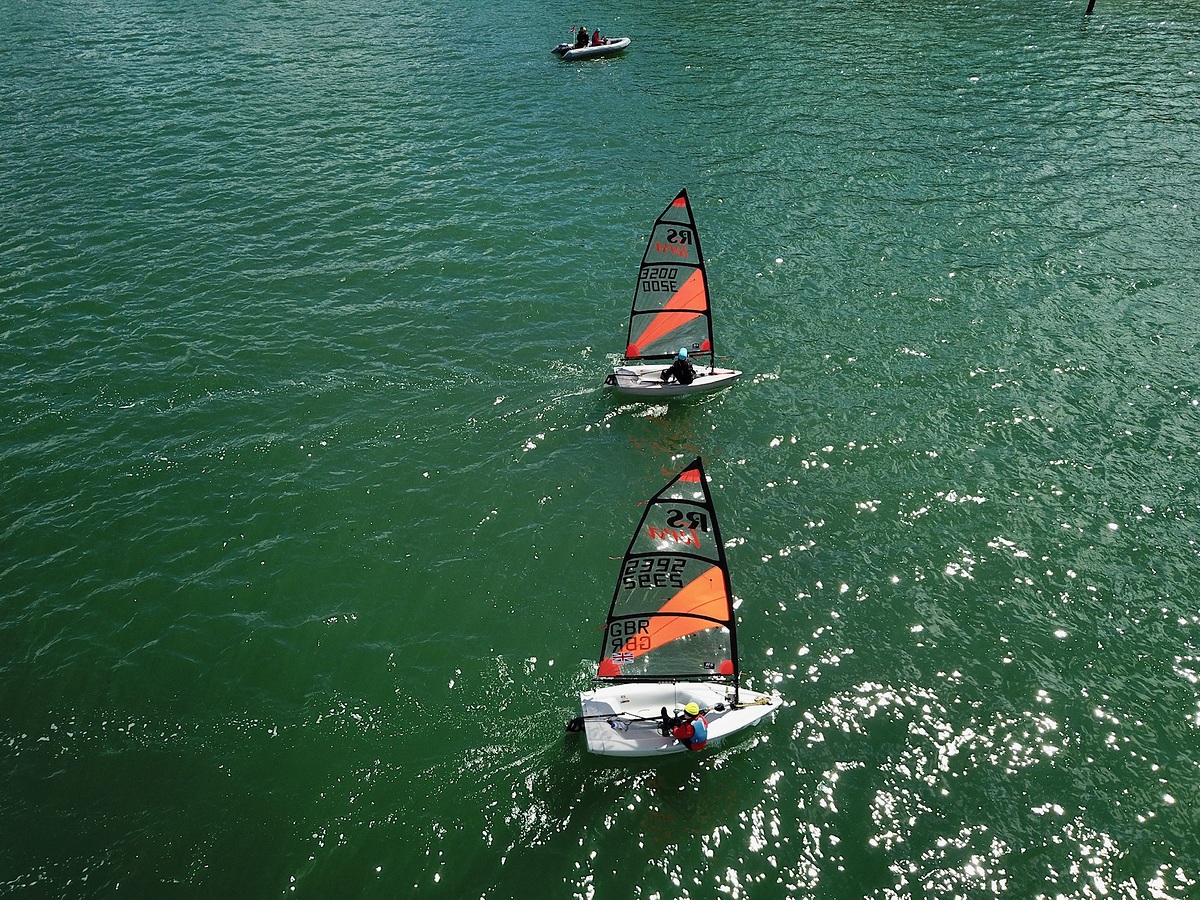